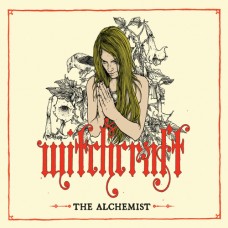 With this, their third album, Witchcraft have finally achieved what they always threatened. The Alchemist is an album that sees them move away from the generic ‘Doom-Rock’ tag into something much more vibrant and worthy. If Wolfmother were hip for the kids and their bearded, balding dads last year, Witchcraft was the band hiding in the cave, waiting to come out at the right time. That time is indeed now for these guys who simply cannot be ignored any longer. Already heralded as a major player in the American ‘Hipster Metal’ scene, these young 70’s rock influenced kids from Sweden, live and breath the grooves they create. Aside from making big waves in underground circles, Witchcraft have also gained the attention of some of the rock & metal world’s leading figures, including big supporter Phil Anselmo, who has proudly proclaimed them as being his “new favourite band”. Recorded 100% pro-tools and digital free, The Alchemist shows a group of musicians at ease. Here is a band that does not rely on distortion and down-tuned guitars, with screaming vocals to achieve a heavy sound. Their brand of heaviness is more of a soulful feeling than a simple gnarly roar. Check out the addictive melodies that flow simultaneously with crushingly heavy riffs, whilst remarkably managing to maintain a relaxed and laid-back feel throughout.
TRACK LIST
1. Walk Between The Lines
2. If Crimson Was Your Colour
3. Leva
4. Hey Doctor
5. Samaritan Burden
6. Remembered
7. The Alchemist